The 'School of Shanghai' THE 'SCHOOL OF SHANGHAI' 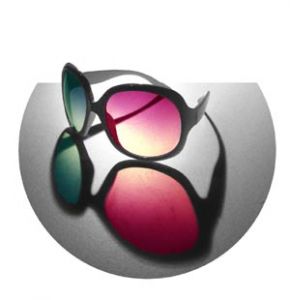 Midterm review group 4
Group 4 started their presentation with a statement. We are no politicians, no artists, we are architects. We try to loo at the situation with a open mind, or any prejudices. Then they quoted chairman Mao. Without destruction there is no contruction. Their proposal: mix the formal city (the new developments) with the informal city (the old living quarters). This mix they call the complex city. The group came up with three parameters with they imply on the complex city. Networking i.e. creating different layers, functional as well as cultural Softening i.e. no hard borders. This can apply for houses as for the riverfront. Revealing i.e. thing that are already there but are not yet shown yet. 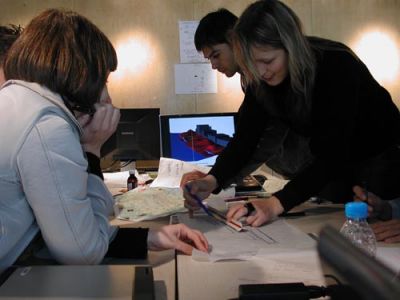 Hard workers
Tina & David & Laura
soaking shanghai
As it not only rains a lot right now in shanghai but shanghai has soaked me up. Its so intense. Sometimes like you want a city tot be, sometimes like you dont want a city to be. Diving in there´s so much to discover on all kinds of scales. Like the real city but also the model f the city at the urban exhibition hall: its big and a lot of information is thrown all over you. In the workshop we are trying to understand the city in a way and to use some principles of the good examples we saw and implement them in the proposals we do for the site. For now it\'s working quite well. We use the workshop just to investigate and to focus on things which are normally not on the focus point. Let\'s go now for the nice breakfast at the hotel. 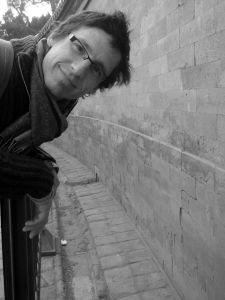 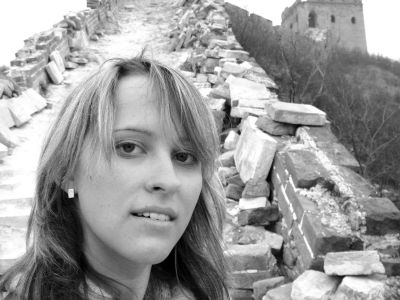 Laura Belevica
The brief
STRATEGIC LOCATION. The aim of this workshop group is to emphasize the nodal character of the site. North-South, it is situated between the Bund and the Expo 2010 grounds, at one inflexion point of the Huangpu river, thus having a great potential for becoming an important focus of the fluvial axis. Along the East-West direction, the site lays in the center of a virtual line that would connect two main representative civic areas of Shanghai: People’s Square, in Puxi; and Century Avenue, in Pudong. FUNCTIONAL INTENSIFICATION. The emphasis on this crossing point is intended to materialize via the densification of the proposed functional program. The ferry terminal shall be designed as a transportation hub that hosted a subway stop (line 4 runs right under the site), a bus station, and a public parking. Instead of giving cultural activities the shape of any recognizable building type (i.e. theatre, museum, …), participants are asked to experiment flexible schemes for the layout of an international cultural center, able to facilitate cultural exchanges among the individuals of Shanghai, regardless their origin, with the dynamism that occurs in any Chinese market, or as represented in the famous fresco (see attached image) by Raphael. Given that the surroundings of the project lack the presence of green areas, the whole site should be considered as an urban park. Participants are challenged to define the character of a “green substance”, from solutions that may consider vegetation as solvent of clear boundaries, to the understanding of vegetation as interface for distinct formal structures. GUIDING PRINCIPLES Participants are also encouraged to develop their projects according to three basic notions. First, “context”, refers to the imperative of using the analysis of the site as main source for any strategic positioning. Second, “sustainability”, since some of the contextual data will suggest a reasonable use of natural resources, including the preservation of old buildings. If possible, a third principle should be incorporated: “information technology”; but in an extended sense, that is, not only as a tool of architectonic representation, but as a medium for a comprehensive planning, which considers the design, construction, and management of spaces, therefore conferring those spaces a qualitative new character. PROCESS The time frame of the workshop is much reduced, but for the benefit of the experience, participants should collaborate closely in the development of the work, so they can explore several scales throughout the design process. Each of the 5 days of the workshop will cover a specific objective: research of context (Sunday), master planning and concept strategy (Monday), architectural design (Tuesday), detail definition of the most characteristic part of the project (Wednesday), and compilation of results for final presentation (Thursday). Note: corrections indicated by other jury members during the mid-term presentation should be incorporated. Bibliography Cities in transition (Arie Graafland, editor. 010 Publishers 2001) East Asia modern. Shaping the contemporary city (Peter G. Rowe. Reaktion Books, 2005) China’s urban transition (John Friedman. University of Minnesota Press, 2005) Remaking Chinese urban form (Duanfang Lu. Routledge, 2006) High-speed urbanization in China (Gregor Janses, editor. Walter König, 2006) Speed. “Doors of Perception” series, Volume 4 (various authors, Netherlands design Institute, 1996) Rediscovering landscape (James Corner, editor. Princeton Architectural Press, 1999) Re-envisioning Landscape/Architecture (Catherine Spellman, editor. Actar, 2003) Land & Scape series (GG, 2005) Natures “verb” (Actar, 2006) CV Pedro Pablo Arroyo Alba Architect and Urban Planner. PhD in Architecture by The Polytechnics University of Madrid. PhD in Engineering by The University of Tokyo. Post-Doctorate Researcher in Science & Technology for the European Commission. Visiting Researcher at The National University of Cordoba, Argentina, and The University College London, Great Britain. Participant of Architecture workshops in Italy, Germany, Thailand, Korea, Japan and China. His architectural and urban designs have received several national and international awards, and have been exhibited and published worldwide. Correspondent in China of the magazine "Pasajes de Arquitectura y Crítica", and collaborator of other various prestigious international Architecture publications.