Shanghai workshops April 2007 AND THE WINNERS ARE..... 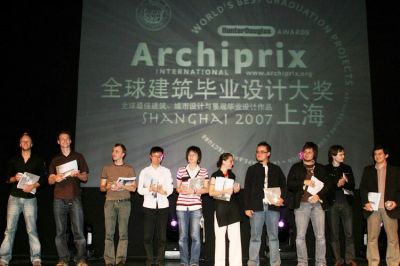 From the jury report: "During the assessment, the Archiprix jury became increasingly enthusiastic about the projects submitted to this edition of the competition. They were fascinated by the way in which graduating designers from all corners of the world managed to apply global knowledge and tendencies to local issues. [...] In Archiprix International 2007, the tone has not been set by visionary and innovative plans, but rather by the quality of the concepts. The elaboration of all nominated projects was extremely refined. Designs were often oriented toward the discovery of spatial solutions for living environments that are becoming increasingly burdened by population expansion, rising energy use, enhanced mobility, and waste production. These environmental problems appear to be a major issue throughout the world, and will probably become even more acute in the near future."
Archiprix