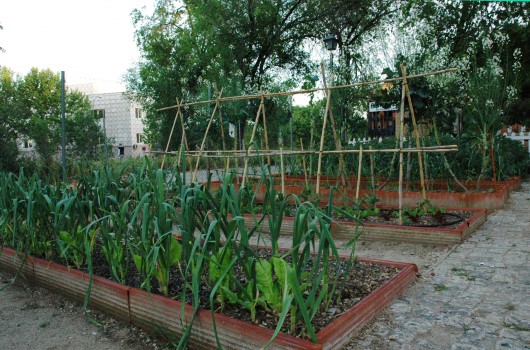 Field trip
The workshop is based on the city-building experiences that appears in Madrid as Urban Gardens and it’s most recently and unexpected introduction in the political agenda by a rather conservative city government. The emergence, multiplication and consolidation of bottom-up initiatives such as ‘Community Urban Gardens’ is one of the most interesting and innovative grassroots initiatives that have occurred in the field of citizen participation and the construction of new models in city-making in recent years. What can be learned? What are the characteristics of these gardens? Who are the ‘agents’ involved? How do they operate? 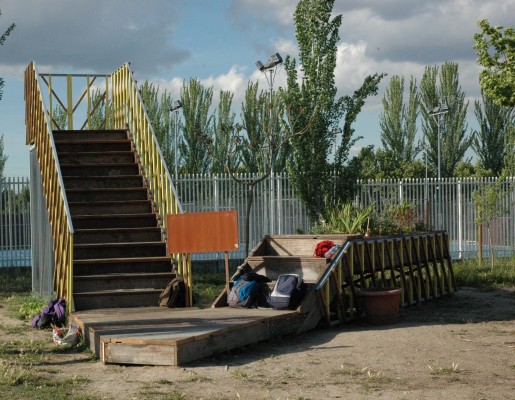 Garden near metro station Villaverde Alto
The legal garden started a year ago. It is an initiative from an external organisation, so no bottom-up but middle-out. The architectural input in this project concerned esthetics and construction. The ‘icon’ in this garden is made out of wood from broken Madrilenian benches. It is a greenhouse, a place to sit, and herb garden all in one. The municipal donated a steel shed, a standardized kiosk that is common in Madrid city centre. 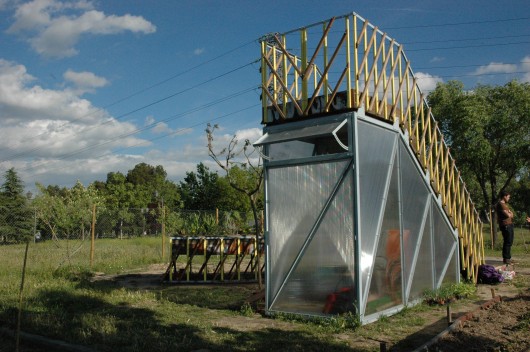 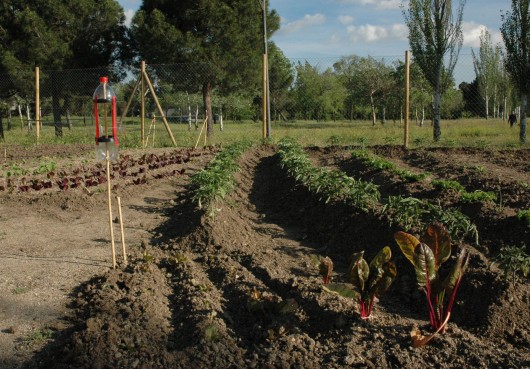 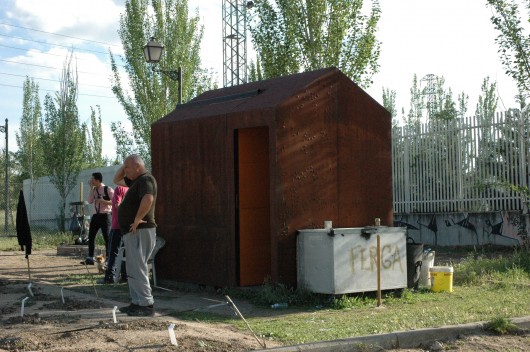 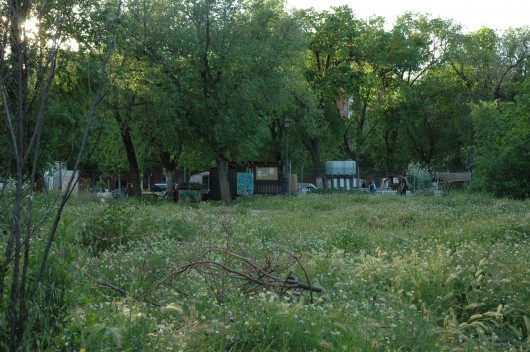 Garden near Hospital 12 de Octubre
The illegal garden is a neighborhood initiative. Two years ago, some people turned an empty plot that was used as an illegal dump, into an amazing place. There are four zones in this garden: a ‘gathering’ zone with tables, benches, a stage, a library, and playing facilities for young children, a zone where they grow medical herbs, a zone for growing decorative flowers, and a zone where they grow crops. Everything is build and made from found and donated material. No architects were involved. The general opinion of the group: it looks wonderful, but could do with some advice on construction and used material. In the future the garden has to make way for a community centre. This seems a bit weird as the garden all ready serves as a community centre. 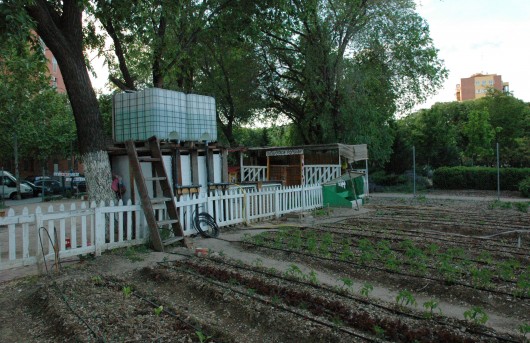 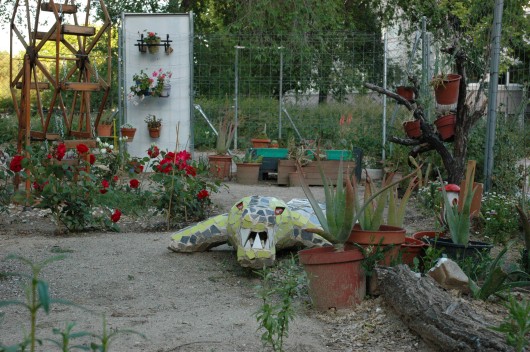 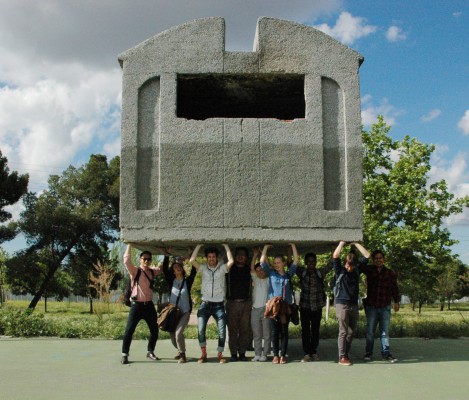 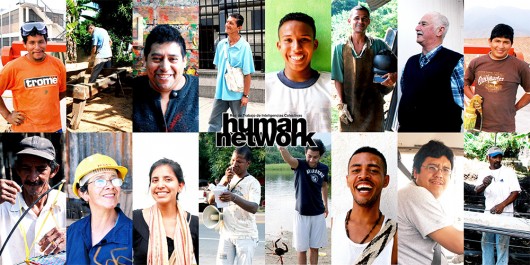 Learning from low-cost technologies - lettuces are forever
LEARNING FROM LOW-COST TECHNOLOGIES -LETTUCES ARE FOREVER- MADRID’S URBAN GARDENS THROUGH INTELIGENCIAS COLECTIVAS METHODOLOGIES. We propose a workshop based on the city-building experiences appeared in Madrid as Urban Gardens and it’s most recently and unexpected introduction in the political agenda by a rather conservative city government. The emergence, multiplication and consolidation of bottom-up initiatives such as ‘Community Urban Gardens’ in the city of Madrid is one of the most interesting and innovative grassroots initiatives that have occurred in the field of citizen participation and the construction of new models in city-making in recent years. It’s a plural, diverse, decentralized, purposeful, democratic and democratizing movement that arises from the bottom, from the neighborhood and partnership, to reclaim new usage models of what’s public and new models in neighborhood relationships. The recent regularization of 15 of these spaces by the City of Madrid has opened the door so that more and more citizens can enter in Madrid’s gardener movement. Making necessary to create more and new training tools from within urban orchards. ZOOHAUS is a creative network-based platform born in 2007 mixing up interests of different agents related to the fields of architecture and urbanism. Since 2009 Zoohaus has been developing INTELIGENCIAS COLECTIVAS, an online open platform and free database which brings together knowledge considered to be on the fringe of traditional construction and urban practice. The investigative and constructive labor of INTELIGENCIAS COLECTIVAS is always done with local agents by means of workshops and the construction of prototypes. IC works on the certainty that when we speak about city, best design comes with the hybridation of traditional ( local artisans / self-made entrepreneurs) and scientific knowledge (architects / engineers / designers). We will use IC as a tool for visualizing the incredible engineering that is hidden behind an urban garden of Madrid. From the social engineering that permits urban-gardeners self-organization, which builds other forms of citizen responsibility. To the re-usage construction engineering, open designs and accessible technologies to transform urbanism with our own citizen hands. We will start with autonomous fieldwork and visits to some of the most interesting gardens of Madrid, to rescue some of these details, catalog them and open to everyone through a free database. Using all this knowledge we’ve managed to bring together as a basis for the design of a family of ‘Orchard prototypes’ in order to evolve those accessible technologies, mixing every possibility with the knowledge and personal background of each one of us. We will also try to hybridize these ‘Orchard technologies’ with other kind of open source construction infrastructures such as Medialab-Prado digital fabrication Fab Lab. The outcome is uncertain for us and upon shall be determined during the workshop to develop. It could be from the design and documentation of this new family of prototypes, to manufacturing and experimenting with physical models of all possible scales. And if everything works in favor, we can even propose the construction of a small ‘Orchard prototype’, either in one of the areas we have visited or in the own ETSAM inner gardens. Everything will be crossed with the pedagogical experience open ‘Ciudad Escuela’ (School City) initiative, which will allow us open the knowledge and expand the collaborative aspect of learning that already exists in Madrid’s urban gardens. 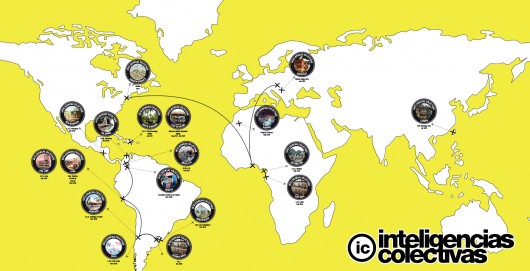