Participants group 2
> Nazmul Hoque Nayeem; > Omkar Bhaskar Jadhav; > Fusako Kato; > Laura V. Revelo V.; > Juan Salamanca Balen; > Neha Panchal; > Bhavin Shukla (local expert)
How can you bring people together with a designed intervention? The Azad Society is a mixed neighbourhood in the west of Ahmedabad. This 1.5-km2 district is home to people with high incomes, middle incomes and low/no incomes. In the north-west corner is the Indian Institute of Management designed by Louis Kahn. Within the boundaries, there are four large ‘inaccessible’ plots awaiting development, many gardens accessible only to surrounding residents, and only two small public parks. Forgotten voices is about the people you don’t often hear from in a participatory design process but who make extensive use of public space: the elderly and children. By walking, talking and observing, the participants collected the stories of the young and elderly and discovered their needs. The aim is to soften the boundaries between the social groups living in Azad Society by bringing the often lonely elderly people and the children together, in the hope that parents will follow suit and become more socially active. To do that, the workshop participants propose a structure on neural public ground that can be appropriated by local residents. The collected micro-narratives are part of the structure.

Forgotten Voices - Urban Place as Social Practice
“an inquiry into the urban built environment as a humane social practice…” in the past two decades, ahmedabad has witnessed rapid expansion towards an ‘ambitious urban future’ altering its socio-spatial dynamics. it is probably time to pause and closely observe the quality of life in this transforming scenario. one of ahmedabad’s critical cross section ,the azad society and its neighborhood, represents a microcosm of the city in all its myriad complexities. this neighborhood has varied cross section of functions, people and income groups that provides multiplicity in terms of its character, usage of spaces along with a contrasting mix of higher and the lower income groups. this urban fabric has a municipal school and the IIM (one of india’s finest learning centers), the shanty settlements and the cooperative housing societies for professors and scientists, apartment blocks for other higher and middle income families and parks, open playgrounds, municipal libraries, and buzzing internal streets surrounded by major transport networks. our present urban landscape is largely designed for the working age group, but there is also a large percentage of the elderly and children. as opposed to the working age group that has a larger radius of contact with the city, the sphere of influence for this demographic is mostly contained to their immediate habitat, for the larger part of their day and therefore life. it is this attempt to understand what this means to them, in conjunction with the overlapping layers of the city. “a unifying factor between children and the old, is their perception of unhurried time –being in the here and now” - Margaret Kernan the workshop endeavors to use this group as agent provocateurs to understand neighborhoods as spaces - for maximum solace, - for reinforcing relationships beyond family - for memories. the neighborhood of azad society, will serve as a canvas to comprehend - large scale strategies and their antipathy to the micro-narratives - what is perceived as singularity manifests as complex, diverse and heterogeneous in our urban milieu. - the multiplicity of layers of the urban built environment which reflects on the day to day activities of the community - the design moves that foster manifesting of micro narratives. - to reflect and inform the ‘mega’ with the micro narratives of mobility, proximity, and the spaces of dialog or any forms of social interaction. 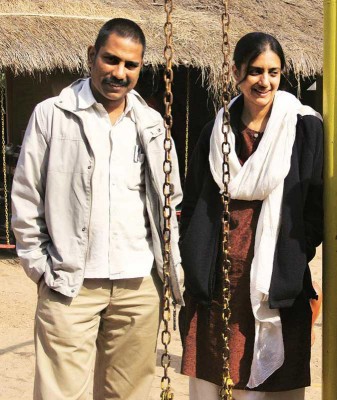 Jaai and Surya Kakani  Jaai is a graphic designer, teaches at design institutes and runs a social initiative working with the community. Surya is an architect, teaches at architectural colleges and considers these interactions as vital in informing the course of their studio practice in Ahmedabad.