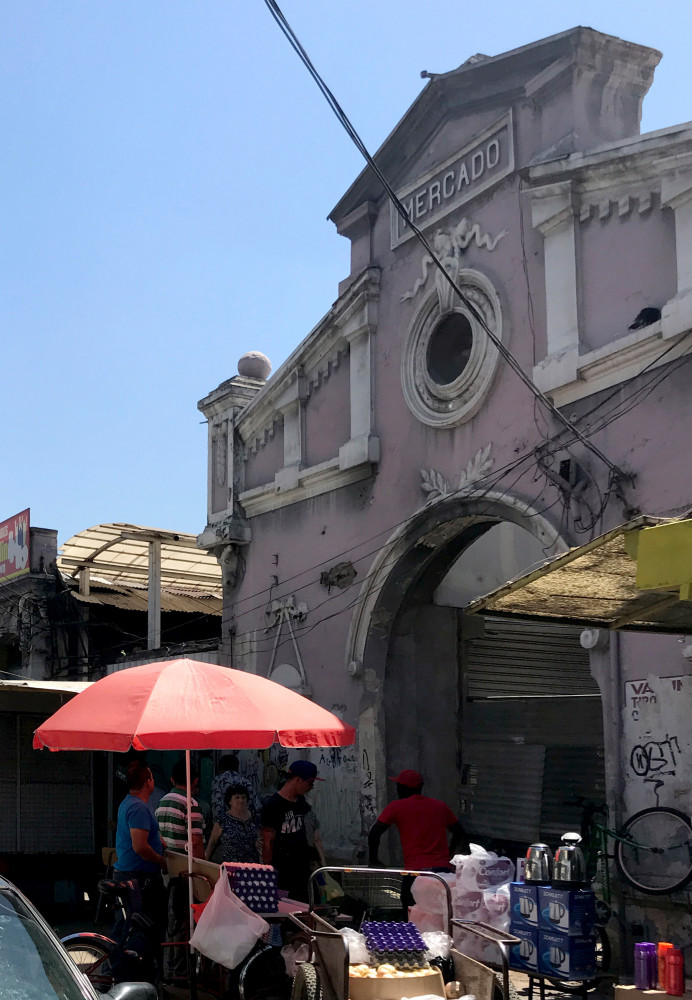 The workshops will focus on the Matadero-Franklin neighborhood in Santiago. The area is both unique and relatable to districts in cities around the globe: a disputed territory between market and social forces. The area presents all the conflicts of the new urban regeneration processes: real estate redevelopment of high-density market-rate housing, emerging gentrification, spaces of mass and informal retail, degraded flood-control infrastructures, obsolete industrial buildings, vacant lots of the former railroad system, and so on. In other words, all the tensions at the core sectors of Latin American cities where cultural, social, and economic values collide, forcing groups and cultural movements to take control over the design of these new spaces.

In that sense, the Matadero-Franklin neighborhood offers multiple layers to spawn a rich discussion and reflection about the design of new build environments through architectural proposals and projects. It also allows us to approach the case through five fundamental scopes: architecture, landscape, technology and resources, urban design, and heritage. At the same time, the Archiprix International Workshops—which brings together a remarkable group of recent graduates who designed the best degree projects in the world—is an opportunity not only to generate a conversation capable of bringing a foreign perspective to our problems but also a chance to resonate with a reality faced by other cities worldwide. Despite a tradition of 80 years of urban planning in Chile, the pressures of the neoliberal economic model and the predominance of private investment have been the primary forces in the transformation of the local urban landscape. This has radicalized the collision between different communities and urban demands, formal and informal. In recent years, Santiago de Chile has become one of the most dynamic cities in the south of the world. Although its population grows slowly, in just two decades the annual building permits have doubled, transforming entire neighborhoods, displacing activities and people. Within this panorama of contradiction and conflicting values, one of the most illustrative urban territories is the one located on the southern edges of the Santiago district (which encompasses much of the city’s downtown). Here, old neighborhoods, obsolete industrial areas and abandoned or vacant lots face uncontrolled real estate speculation, the development of new informal and creative economies and the threatening of social and cultural heritage. Picture the following: streets jammed with formal and informal vendors while pedestrians scan the merchandize here and there, attracted by the color, the variety, and the accumulation. In between, old and new warehouses bursting with furniture, antiques, technology, books, and all kind of products—vintage or brand new—scattered through a neighborhood famous for being the largest flea market in the country. At the heart of the area, one of the biggest markets in a city of 7 million people: 250 by 250 meters of vegetables, groceries and meat—a lot of meat, since this was the location of the city’s Municipal Slaughterhouse up until 1970, when it was moved less than a kilometer to the south and three kilometers to the west. If in 1847 the area was just a collection of productive and industrial buildings far away from the city, by 1980 it came to occupy a strategic position as a new centrality for services and commerce with about 550 hectares of early twentieth-century working-class neighborhoods around. Now, almost at the geometric center of the urban area and with scattered high density real estate projects around, these infrastructures become a rather forgotten example of industrial heritage of the late nineteenth century, camouflaged between housing, warehouses, consumer goods, graffiti, garbage, terrain vagues, and people. According to municipal data, the neighborhood has a monthly flow—both vehicular and pedestrian—of over one million people; and more than 250 thousand people are attracted to the area, a number that doubles during holidays and festivities, which explains the slogan “the open mall of Santiago” which the public administration used for the neighborhood during the 2000s. (1) Today, with two stations of different subway lines—the latest one inaugurated in November of 2017—the neighborhood is becoming a hub of interest not only for restaurants and artistic interventions, which have proliferated among the commerce, but also for real estate developers of high rise housing who are drawn by its centrality and connectivity, the size, potential and availability of the lots, and, especially, the prices. On the other hand, in mid-2018 the municipality has launched a revitalization plan promising to improve security measures, beautify public spaces and green areas, and promote culture and trade.(2) Indeed, the area’s magnetism has come to such a point that one of the biggest local TV networks has recently released a soap opera based on the area (3) and the municipality is working with the local architects’ association to host the next architecture biennial of the country in various buildings, including one or two of the former slaughterhouse. (4) In October 2019 the XXI Architecture Biennial of Chile will take place in the Matadero-Franklin area. The proposals for the area made during the Archiprix International workshops will be presented in the Biennial. 1 Estudio de Pre-Inversión Barrio Franklin-BíoBío (Pre-investment Study of the Franklin-BíoBío Neighborhood), Servicio de Cooperación Técnica (Sercotec), 2004 2 Municipalidad de Santiago, https://www.munistgo.cl/santiago-firmo-convenio-para-la-regeneracion-de-barrios-historicos/ (consulted December 14, 2018) 3 “La Reina de Franklin” (released in November 19, 2018), http://www.13.cl/programas/la-reina-de-franklin (consulted December 14, 2018) 4 Colegio de Arquitectos, http://colegioarquitectos.com/noticias/?p=22269 (consulted December 14, 2018) Santiago December 29 2018 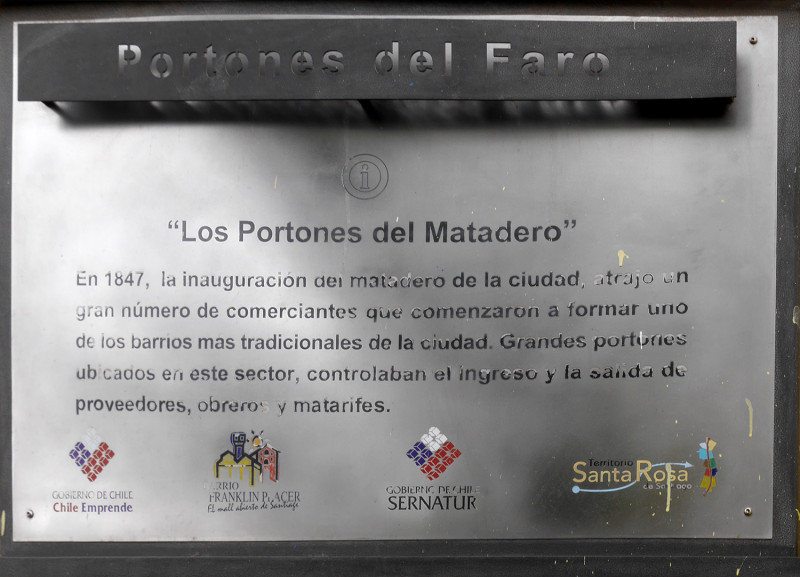 The gates of the Slaughterhouse
In 1847, the opening of the slaughterhouse of the city, attracted a large number of merchants who began to form one of the most traditional neighborhoods of the city. Large gates located in this sector, controlled the entry and exit of suppliers, workers and slaughterers.