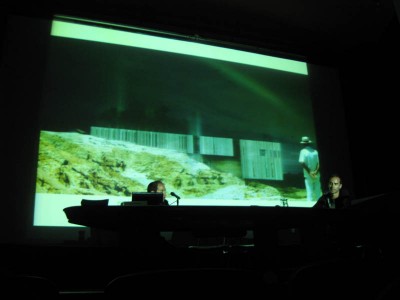 Lecture nights
During the week that the workshops are taking place, there are evening lectures giving by the workshop leaders about their own work. It gives participants and other workshop leaders an introduction about the way the different architects operate, differences in style that also show in the way the various workshops are being organised, the way the briefs are formulated, and also in the design approach. The lectures form a kind of connection between the Archiprix workshops and the FARQ students and staff, that\'s why they being held in Spanish. Officially the lectures start at 7.00 p.m, that is 7.15 p.m. Uruguayan time. Perhaps it is a coincidence, but way the South American architects presented their work, differs completely from the way architects present their work in the Netherlands. If you go to a lecture at say the Academy of Architecture in Amsterdam, the lecture will last no longer than one hour, that\'s the average concentration curve of the Dutch. If it takes longer Dutchmen and women will start shovelling on their chairs, make whispering conversations. Generally, the presentation itself is most of the time one big success story, illustrated with flashy renderings and architectural porn pictures, one or two floor plans and if you\'re lucky a section. (Maybe I exagerate a little bit, but not so much as you might think.) Back in Montevideo. According to the timetable the lectures would last one hour each, two lectures on one evening, so from 7.00 till 9.00 p.m. no break. No way, the first lecture series ended at 10.30 p.m., the second at 10.10 p.m. (no breaks) and nobody in the audience, many students from FARQ among them, seemed to object. Although the various presentations differed, the structure of the lecture was the same. All projects where presented in a very detailed way, what went well, what went wrong, with images of the construction site, drawings of details. If you put it black-and-white, these \'South American\' lectures are more about sharing information with colleagues, and the \'North European\' ones seems to be more concerned about representation. At times even a bit showing off when the speaker shows his/her colleagues how inventive he/she is, what a nice commissions he/she has, and how well the office is organised. When you think of it, comparing both styles, the Dutch one occurs to be quite boring, even if it last half of the time. Photo showing the lecture by Adrian Duran and Mario Baez
Re-use
Lost of old buildings are empty and in decline. Some are re-used, like the old market hall at San Jos√©. Downstairs there are shops selling handcraftstuff, and upstairs there are restaurants. On Saterday nights is full of people from Montevideo who eat, drink, dance and listen to live music. 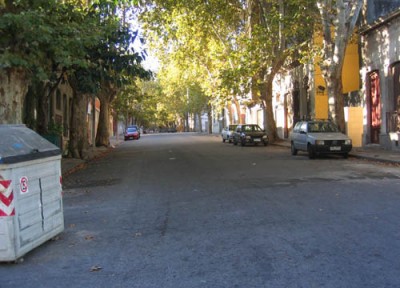 The most important thing in the world
Deserted streets, empty buses, Montevideo at 5 p.m. on Saturday the 28th. The national football team is playing Paraguay. It\'s a qualifying match for the World Cup games, which are held in South Africa in 2010. Only the first four teams of the group can qualify. Before the match started Paraguay was first in it\'s group with 23 points. Uruguay fifth, with 13 point, three points behind Chile and Argentina. Great was the joy in our local when after 90 minutes Uruguay beat Paraguay with 2-0. (photo: Montevideo at 5 p.m.) 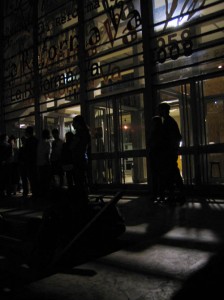 FARQ
The workshops take place at the Facultad de Arquitectura, an amazing place located near the centre of Montevideo. The design of the building is the outcome of a competition that took place in 1938 and was won by R. Fresnedo Siri and M. Muccinelli. The building was completed in 1946. In the next decades, three major extensions were added and since 2000 the building is listed as a national heritage site. Today more than 6000 students read architecture at the faculty. What's most striking about the building is the way it's being used. The corridors that give access to the classrooms, opens towards the large patio in the middle of the building. Patio is perhaps not the right word for this green space where water flows through, it's an open air study room, a gathering place, lecture theatre and assembly hall all in one. The corridors itself are being used as workplaces. And than there are the stairs in front of the entrance of the building. As smoking is not allowed inside the building, the stairs are crowed with people. The faculty is open 24 hours a day, seven days a week. Everybody can walk in and out, there are no security people, no cctv, if you want to get in between 1.00 a.m. and 6.00 a.m. you have to ring a bell, and it's works fine. Makes you wonder what went wrong in other countries, were you need security cards and have to go through detection gates to get into a building and cctv hanging everywhere 'for your security'. The average time between enrolling the study and graduation is twelve years. That's not because the students take it easy, but it's due to the financial system. Enrolling a public university, like the FARQ, is free, you don't pay any tuition fees, but there are no such things as student grants. Therefore, students have to work, unless of course, you have rich parent who can support you. As Uruguay does not have a system of part-time jobs, most students work at daytime and go to the university at night. That's why the building is quite empty during the daytime and lively in the evening. And with employers not being very cooperative for giving you days off for leaning or even taking exams, twelve years for completing your study doesn't seem to bad. Another great thing about FARQ is the student involvement. De students syndicate owns and exploits the cafe/restaurant, the bookshop, and the shop where they sell model making stuff. All the profit they make is for the benefit of the students. Ones a year a group of about 600 students make a trip around the world in ten months. This trip is financed by organising a big national lottery. The first prize is a house, which is the winning design of a competition held among students. When a student finally graduates, he ends up in the pond, and is covered with flour and eggs afterwards. The first night all workshop participants met at FARQ, this ritual was taking place. It amazed everybody. 'So much different than in France', as one of the workshop participants remarked, 'we are offered a glass of champagne, to drink'.
Who\'s in and who\'s out?
As days passed, it seemed that not everybody who enrolled in the Archiprix workshops has arrived. Some couldn\'t make it because of personal reasons, like the guy from Singapore who serves his country, the army didn\'t allow him to take time of. But there are also many, who had difficulty getting a visa. Like the girl from Bangladesh, who had to go to the Uruguayan embassy in Mumbai (India) to apply for a visa and then wait for ten days before receiving it. She didn\'t come to Montevideo because this procedure of getting a visa was to expensive for her. Others had to show their plane ticket when they applied for a visa. For some of them this was a catch 22, buying an expensive ticket and not being sure if you are allowed into Uruguay. Needless to say, but the people from most European countries and South America didn\'t need to apply for a visa. The capsule society, as the Belgium philosopher Lieven de Cauter describes the politics of exclusion, in a nutshell. (When people from South America want to go to Mexico, they need to apply for a visa as Mexico is seen as the stepping stone to America. And if they want to visit America they have to go through a long and intensive proces, and the apply can be turned down at any time.) 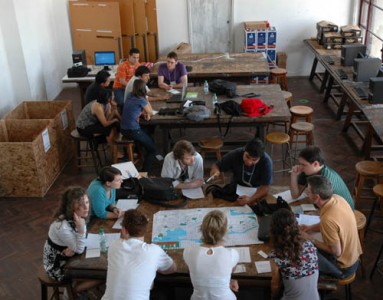 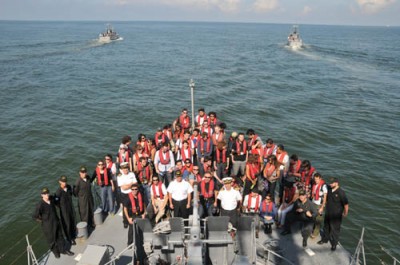 The Excursion
Uruguayans are known for their ultra relaxed attitude towards life. It's being mentioned in every tourist guide and promotion movie for tourist. This take-it-easy attitude is something the Uruguayans cherishes. Today we made a long boot trip along the coastal line, from the centre of Montevideo up east. Exemplary for the relaxed attitude is that the trip took place on three navy vessels. It was very special, nobody could image that this would have been possible in their home country. We got a grand tour around the ship, which used to be from the German navy, and could take pictures of everything. Alas, it was a hazy morning, so there was no clear sight on Montevideo. Still, it was fun. It was a great way to get to know each other, there were many photo sessions, and most of us got a nice red tan. 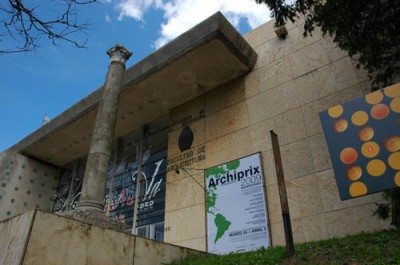 start workshops
Over the last four days the participants and workshop leaders flew in from all over the world. On Thursday the workshops officially started with a meeting at the Facultad de Arquitectura. For the next seven days the participants will think, discuss and design on issues concerning water, informal settlements, the port, the Ramblas and recycling city tissue. The outcome of all the workshops will be presented on 2nd April and will be followed by the opening of the exhibition of all projects send in for this years Archiprix International edition. The big award ceremony will take place on Friday with speaker like the eminent Brazilian architect Ruy Ohtake and Marcelo Ferraz, who worked closely together with Lina Bo Bardi. The young and already famous architect Bjarke Ingels will present the workshops results to the large number of people that is expected to come to the ceremony. 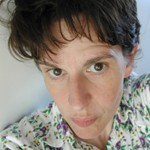 ArchiNed editor Marina van den Bergen will be present in Montevideo during the whole workshop. She will infiltrate into the workshop groups and write her daily observations...