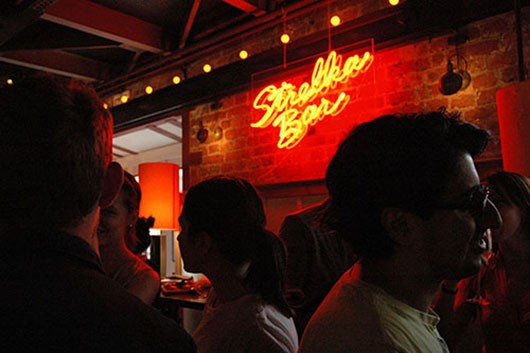 Prior to the serious fun of attending a workshop, Strelka, the workshop host, invited all participants (80 young professionals from 34 countries) for drinks at their place this evening.
For more photo's click here 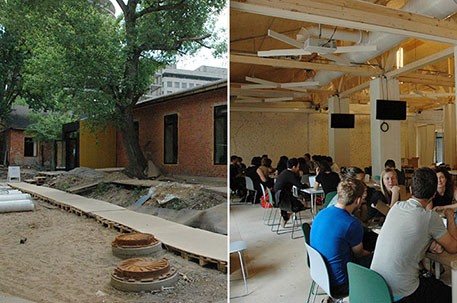 The venue for the workshops: the education pavilion of the Garage in Gorky park 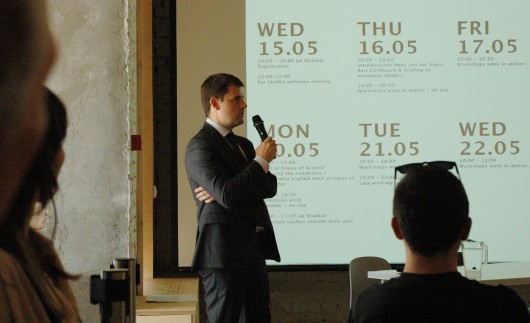 Tasks that lie ahead

'It's not about age but about experience and ambition', with these words Sergei Kuznetsov, the chief architect of Moscow was introduced. August last year, the the Mayor of Moscow Sergey Sobyanin appointed Kuznetsov, then 35 years of age, for this highly profiled position. The chief architect gave a talk this morning at the start of the workshops in which he briefly explained the difference in approach between Soviet city planning and the kind of city planning he stands for.
In spite of all the propaganda of happy people in shiny new cities and neighbourhoods, the focus in Soviet times was mainly on the military, the economy and the (heavy) industry, and not so much on the basic needs of the people, according to Kuznetsov.
Today the focus of city planning is creating a good environment for the people who live in the city. Kuznetsov consider them the most important asset of the city, they pay the taxes, they should live happily. One of the problems the city has to deal with are the regulations and rules. They were not set up to focus on the real issues, i.e. how to deal with private and how to deal with public space.

After the opening of the iron curtain, the public space was neglected and became more and more not always legally privatised. Kuznetsov aiml is to increase the quality of green spaces in the city. His efforts are not only for making the inhabitants of Moscow happy, but also for Moscow to be able to compete with other global cities like London and New York (according to Kuznetsoy Moscow has no competitors in Russia). In the international competition for human resources, it is important to have among things like affordable good places to eat, affordable dwellings for the middle class and attractive public space. Not only in the city centre, which is too expensive for most people, but also in the neighbourhoods in the so-called middle zone where many people live and that are often associated with crime and other less social behaviour.

Being asked what kind of proposals he would wish for as outcome of the workshops, Kuznesov immediately answered: boundless, wild, radical, out of the box. A pragmatic, cosmetic approach can look nice but doesn't bring real changes. For discussions about the future of the city you need radical ideas, said the chief architect of Moscow. Let's hope he can make it to the workshop presentations next Thursday to discuss the proposals for a What if.... Moscow. 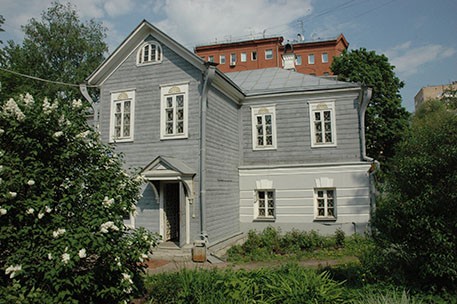 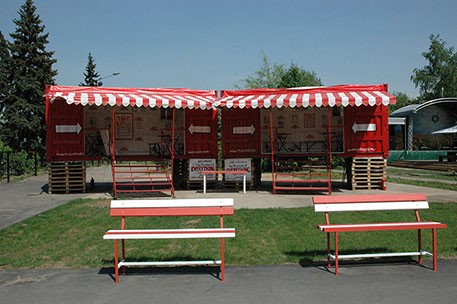 Who owns the park?

At first glance, Gorky Park looks like a successful city park. On a hot sunny day, it's busy but not overcrowded. You see young people, older couples, mothers with children strolling along, sitting on benches or hanging in one of the many beanbags that are scattered all over the place. In the park you can find kiosks and small and large pavilions where you can sit and have a drink and a (expensive) bite. For small children there is a little fun fair, older children can hire inline skates, and the even older children can enjoy themselves with padelos.
But something seems not right in this picture. It sinks. Unlike most European city parks you don't see people play football on the grass. Activity is sponsored or have to be paid for.

The originally name of Gorky Park as it opened in 1928 was 'Cultural Complex in the Open Air'. It was set at the location where the All Russian Agricultural and Handicraft Industries Exhibition took place in 1923. Later the park became known as the Central Park of Culture and Leisure, where you could see exhibitions and enjoy a view of the city from a big Ferris wheel. Give into account the history of the park, it is not strange that there is some arranged activity, and that there are pavilions in the park. There are even quite a lot of pavilions in the park. New ones being build and old ones being extended, and extended. But how many pavilions can a park have before it flips from a public park to a privatised commercialised space with only public pathways in between?

Does Gorky Park reflects the Moscow of the new entrepreneurs, or can this commercialisation of public space still be stopped and turn the Moscow public space into a nice place for the inhabitants, as chief architect of Moscow Sergei Kuznetsov spoke of in his talk last Wednesday at the opening of the workshops? 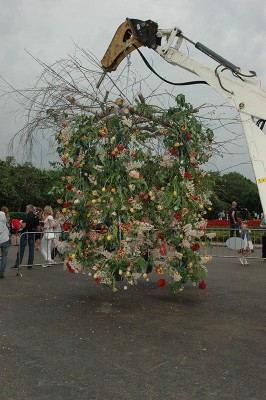 Also in the Gorky Park, the beautiful flower sculpture made by Frank Bruggeman 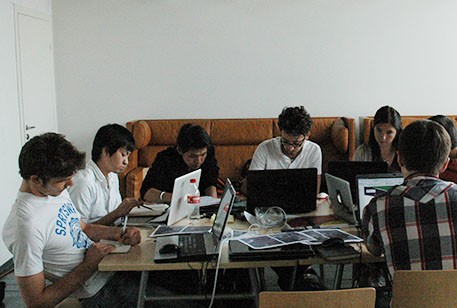 It sounds simple, put bright newly graduated architects, urban designers, and landscape architects from all over the world together. Give them an assignment that starts with What if..., and something good will come out. Something good will come out at the end, but to get there prove sometimes not so easy.
After exploring their site yesterday, it was time today for the participants to formulate a brief, a method research, possible ways of representing the outcome (a real design or more conceptual?), and already thinking about ways of presenting the workshop results. Bear in mind that they have only four and a half days left before the final presentations take place at Strelka. And if this is not difficult enough language barriers have to be taken, as well as cultural barriers, and differences in design approach.
On Sunday, the groups will update each other with presentations at the Studio.
To be continued. 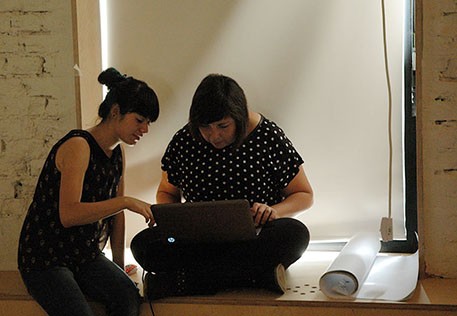 The common words heard yesterday during the intermediate presentations of the workshops were dualism, paradox and (of course) potentials and opportunities. Problems seem to be a word from the past. And to be honest, with the sun shining and people out on the streets and in the parks enjoying each other's company, the future looks bright.
Check the different workshops for a brief update on their progress: The Green, Urban re-personalisation; Standardisation; Railroad; Schoolyards; Military and secret service zones. 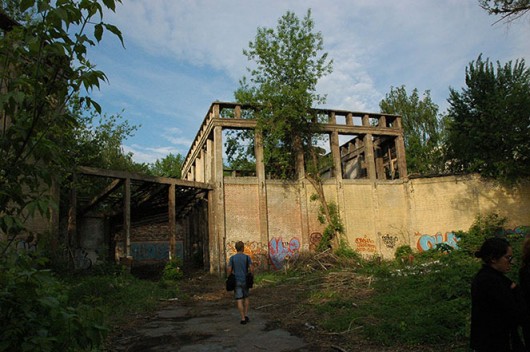 Garage Centre for Contemporary Culture host the workshops in their education pavilion. They offered the workshop participants a tour around their premises in the Gorky Park. The excursion started in the temporary exhibition pavilion designed by Shigeru Ban (for those who had any doubt, the cardboard tubes are filled with concrete) with a visit to the exhibition that is on display right now. The Museum of Everything / / Exhibition #5 curated by James Brett is an interesting exhibition. Brett did a survey on contemporary, self-taught, non-traditional art in Russia today. On display, set in a special exhibition design, are not only the artworks but also short video interviews with the makers.
Next stop was the Vremena Goda building. OMA will renovate this '60 structure into the new permanent location of Garage. There was not much to be seen. The website of Garage writes that it opens in 2013, according to the architect's website it will be 2014.
After a short walk the group arrived to a derelict pavilion from 1923, designed by Ivan Vladislavovich Zholtovsky and build to house a display of agricultural machines. Upon entering the-what-was-once-a-building didn't look special but once inside it turned out to be a real gem. In the middle of the complex there is a large round court with six buildings around it. You don't need to have much imagination to understand what a wonderful place this can turn into. The building has been empty for more than forty years and is now owned by Garage. They haven't decided yet what to do with it and which architect will be ask to make a design.
Last stop was at the office of Garage, also a building from 1923. A Russian firm did the design of the renovation and captured the history of the building in a dramatic way. Special feature is a large window in one of the offices looking out on the part of the building that was demolished by a bomb in the Second World War. 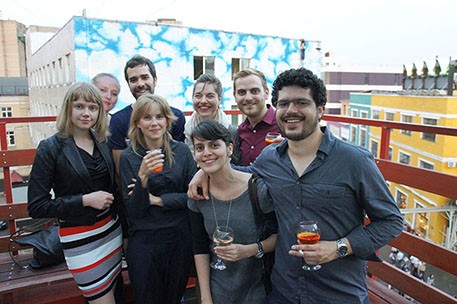 The last day before the final presentation. Group Schoolyards is very relaxed. Rumour has it that yesterday they had a day off. When asked, they said No Comment.

Thursday were the final presentations of the six Archiprix International workshops at Strelka. Bart Goldhoorn set the general brief for the workshops titled What if....Desacralizing Moscow's Urban Planning's Holy Cows. Based on this the workshop leaders chose a theme, formulated a design challenge and picked a case study site. After seven and a half day in which sites were visit and analysed, the formulation of the workshop brief being rephrased, and lots of discussions, a designed proposal to the What if question could finally be made.

The work presented by the groups differed in scale and approach. The audience was treated with beautiful graphic presentations. What the proposals of all groups had in common was the acupuncture-like attitude. Instead of big futuristic utopias, the proposals were moderate interventions that were to work as a catalyst to make big changes possible.
This approach aroused critic from some in the audience. They interpreted the absence of physical build structures in the proposals as a hesitation to take position, and even not realistic if you really want to change the city and find true solutions for its problems.

The participants replied that architects no longer need to design physical structures only. They see it as their task to visualise spatial problems, to give possible solutions for those problems and initiate discussions. The common feeling among the participants was that big gestures are not the answer; an anthropological approach is needed to deal with the duality enclosed in all the workshop briefs. According to one participant, architects should be more critical pertaining to the supposedly spatial problem. If there is no problem, don't create one just for the sake of designing a solution.

All final presentations of the workshops are online. 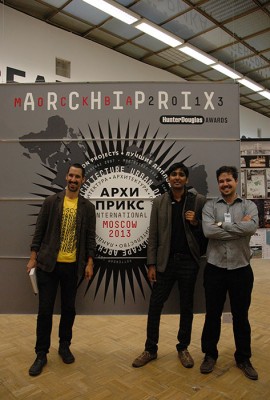 ArchiNed editor Marina van den Bergen will be present during the whole workshop. She will infiltrate and write her observations...contact her by sending a email to news[at]archiprix.org